NOTE: The holes where the arm attaches to the magnet are not threaded.  When screw will self-tap the hole and create the threads when inserted for the first time.

This includes the two main parts of the adjustable arm, thumbscrew, plastic washer, and rubber washer for the Umbra Tall support.

This arm is the only difference between The Umbra Tall and the Umbra Standard or Umbra Short.  If you have a Standard or Short, you can purchase this arm to convert it to a Tall.

The longer arm arrived promptly, was very easy to install and allowed me to set the angle of my guitar perfectly. The system is very comfortable overall and allows me to keep playing position no matter where I'm sitting. Best of all, it can still be collapsed down small enough to fit in my case!

P
Patrick Lui
The only one that works for me.

The Sage guitar support is the only adjuster that works for me. Especially, when it comes to the Tall attachment. I prefer the Umbra over the Atlas. I like the Wood look but the Plastic one is perfectly engineered and make no noise and no unwanted movements at all. It’s also a lot cheaper.

I've trying pillows, stools, a cheaper version of a similar support like the Sagework, but nothing really worked that well. After getting neck pain from poor posture, I finally ran across this brand. I have been MORE than satisfied with it and it has helped my playing and posture immensely. It it simply THE best! It works on all of my acoustics...traditional classical, nylon string acoustic, dreadnought body steel string...and it works great on all of them. I just bought extra magnets for each instrument. My only disappointment is that it's not possible to use with a solid body electric. I supposed I could drill holes in the body and mount the magnets, but, umm, no on that! After several months, I also realized that it wasn't raising the neck high enough for me (I have a long torso), and so I bought the tall extension and replaced it (just a few screws) and it's worked even better. The only thing I'd like to see different is if the leg support could somehow pivot, but I can work around that without too much difficulty. Nothing comes close to this support!

Can' recommend it highly enough. Guitar supports are of course a very individual thing, since everyone holds the guitar a little differently, but these are cleverly conceived, extremely reliable, very adjustable, good looking, and sturdy. I can't imagine going back to any other system.

I'm not a tall person but when I play I like my guitar position somewhat 45-degrees or slightly more. I bought an Umbra tall adjustable arm and replaced the short arm of my Atlas with it. Now I have an Umbra-Atlas hybrid that's positioning my guitar where I want it. I'm satisfied, once again. 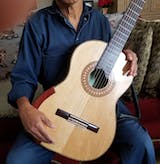 You'll be the first to know about new products we're developing as well as any special deals.  We'll never sell your address or Spam you.  Opt out any time.